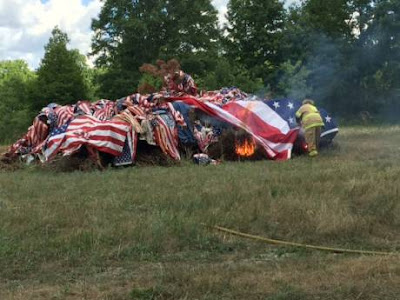 There go a bunch of 6 Bears Farm American Flags!

by Howard B. Owens

Photos and info submitted by Jerry Diskin.
The American Legion post in Le Roy, Botts-Fiorito Post #576, conducted a flag disposal ceremony Sunday afternoon, burning flags that had been dropped off with the Legion and deemed no longer serviceable.
The ceremony was held at the Northwoods Sportsman Club on Gulf Road with the assistance of the Le Roy Volunteer Fire Department.
There were approximately 335 flags disposed of in the ceremony, including the giant flag that was replaced on the Orcon Industries building on Lake Road.
The ceremony was conducted by Post Commander Don Schafer.
The ceremony is based on Public Law 344, passed by the 94th Congress in 1978:


"When the flag is in such a condition that it is no longer a fitting emblem for display, it should not be cast aside or used in any way that might be viewed as disrespectful to the national colors, but should be destroyed in a dignified way, preferably by burning or by some other method in harmony with the reverence and respect we owe to the emblem representing our country.” 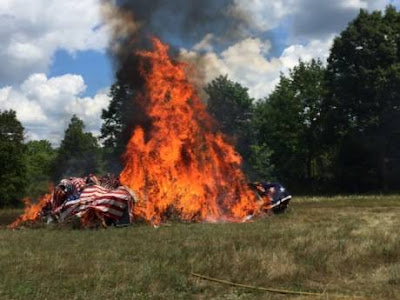 
Hello there! Do you use Twitter? I'd like to follow you if that would be ok. I'm absolutely enjoying your blog and look forward to new posts. capitalone.com


Hi would you mind sharing which blog platform you're using? I'm going to start my own blog in the near future but I'm having a tough time deciding between BlogEngine/Wordpress/B2evolution and Drupal. The reason I ask is because your design and style seems different then most blogs and I'm looking for something completely unique. P.S Apologies for being off-topic but I had to ask! gmail email login